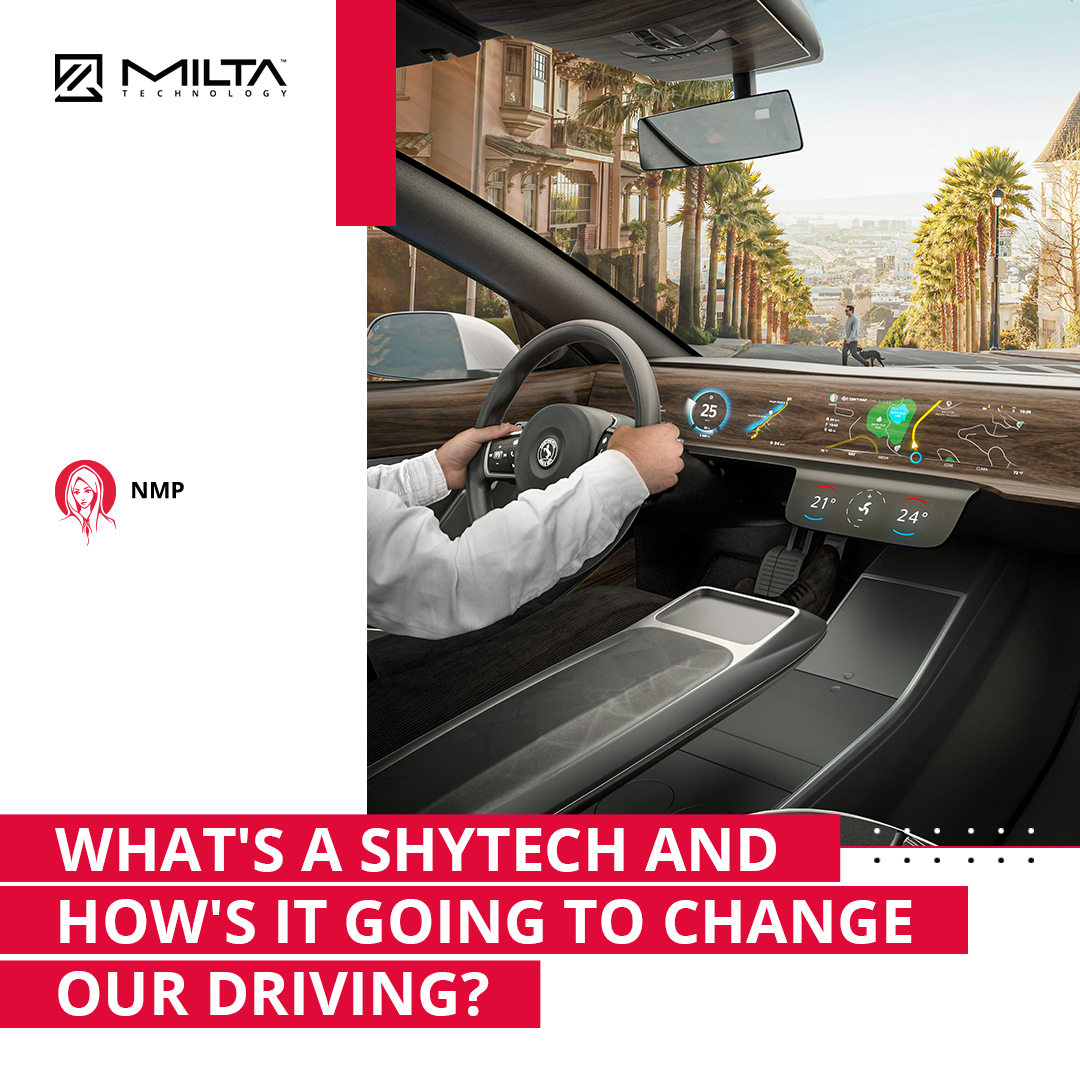 What’s a skytech and how’s it going to change our driving?

If you’ve heard mention of a new driving technology called “ShyTech,” you might wonder what exactly it is you’re hearing about. In today’s blog, we’re going to answer key questions about ShyTech, what it is and how it could potentially change the way we drive.

In short, ShyTech refers to a new kind of driver display created by Continental, that offers a completely new take on how we arrange and design dashboards, and consequently the entire interior design for cars.

/
What is a ShyTech Display?

The ShyTech display is a new information display system created by Continental, and is designed to serve the needs of modern drivers who are driving smarter and smarter vehicles. The problem car makers are having is quite simple. Cars nowadays can collect more information than ever before, but where and how they display that to the driver is limited to the amount of screen space that is available in and around the cockpit.

The main solution to the problem of having more data to display, therefore, was just endlessly larger and larger screens. The problem? There’s a limited amount of dash space that you can realistically fill with screens. What’s more, even with more screen space, there’s seemingly no end to the amount of information that you could display. Over time, as the amount of data increases, the odds of displayed information being something the driver needs to know right now is greatly reduced.

The ShyTech display concept is supposed to address this key problem by creating a unique display that can span the entire dashboard if so desired, but only shows what the driver needs. It does this through the use of a semi-transparent surface behind which multiple screen layers are seamlessly integrated. Different functions and displays can be brought forward by voice command, or by tapping on the dash surface.

The ShyTech system gets its name from the idea that information and displays that are not needed will become “shy” and thus hide themselves from view. In the meantime, the entire dashboard space is used to create an expansive and crystal-clear display. In short, there is no screen as we understand the term currently for the ShyTech display. The dash itself becomes the display, and comes finished either in wood, carbon or leather.

Such a design has huge implications for interior car design, as well as altering the dynamics of modern driving, all of which we’ll cover further below.

/
How ShyTech Will Change Vehicle Interiors

The idea that information display screens need no longer be immediately visible to the naked eye has huge implications on how car interiors are set up in the future.

A Dash of Screens

The first thing that the ShyTech display can deliver is potentially an uncluttered dashboard that is nonetheless bursting with screens. The driver cockpit display and central touchscreen areas will have their usual (but larger, smarter and more attuned) displays, but the concept also invites for screens to be placed before the front passenger. This could allow the front passenger unique and easier access to certain controls for climate, entertainment, and more. They could also pull up navigation information and potentially share key information with the driver without distracting them.

It also creates potential for screens to be integrated into more parts of the car more seamlessly. It could mean rear passengers have a screen placed into the space between the front two seats, or instance, or perhaps even into the seat backs of the driver and front passenger seat. Since the technology is relatively new, it’s hard to say exactly how it might be applied, but the scope for applying it across different surfaces means car interior designers will have to rethink how technology can be deployed.

Some people dread the onset of haptic controls, clinging instead to any car that will give them a precious dial or knob that they can easily turn while driving. Haptics have in the past been problematic for some, but a newer generation of younger drivers is all too familiar with them, and they will certainly become the norm. The ShyTech display and similar technology will be a big part of that transition.

More Attention to Quality of Surfaces

If the screens are going to be placed behind the dashboard and other surfaces, then the finishes of those surfaces will be a key design point in the future. The race to create the finest surfaces that are most pleasing to the touch will be the defining characteristic of a truly luxury and high-tech car interior.

With all the screens, buttons and other things being removed from the dash, the rest of the car’s interior will need to look equally uncluttered and contemporary. This should lead to the design of cleaner lines and surfaces, fewer plugs, holes and ports and more integrated smart surfaces that handle everything seamlessly.

/
How ShyTech Will Change Driving

First of all, it will allow drivers to more actively call up information and data as and when they need. With cars as they are, what the driver sees and when depends greatly on the pre-established customization and setup of digital cockpit features. If any and all information arises when the driver needs or when they call, and when all information is as visible as any other, then it means the driver can feel as though they have more control over what the dash displays.

Following on from the previous point, by not trying to cram in more and more data into the same limited space, OEMs are ensuring that drivers have a more distraction-free environment in the cockpit. In many current displays, drivers sometimes get very distracted trying to locate one particular light, or symbol, or other indication that a feature is active or not. When you are unfamiliar with the car setup, this can be both frustrating at best, and at worst distracting to the point where you might even get into an accident.

While drivers will have control over the system through voice and haptic controls, the ShyTech system is designed to be intuitive and smart enough to provide the most essential data without cue and without hesitation when the driver needs it. With everything equally visible on the dash, the driver can thus be properly informed of all the most important things going on around them.