WHAT IS 8 speed MULTITRONIC TRANSMISSION?

The gear connected to the pedals is half the size of the one at the rear wheel. For every full rotation of the pedals, the wheel would rotate half a turn. You would travel slowly, but the pedals would be easy to move.
Swap that around so that the pedal gear is now double the size of the wheel gear. For every full turn of the pedals, the rear wheel would turn twice. It would be really hard to set off, but once moving, you could achieve high speed.

That’s exactly how it works in a car. A conventional manual gearbox will have five or six gear ratios, with the lower set useful for low speed – pulling away from junctions or climbing hills – and the higher ones for cruising on the motorway at low engine rpm.

Normal automatic gearboxes work in largely the same way, except the job of depressing the clutch and swapping the ratios around is taken care of by the car.

A continuously variable transmission (8 speed multitronic) also works automatically to alter the speed of the wheels in relation to the engine, but instead of using a box full of gears, it has a pair of pulleys – which is why it is referred to as a transmission, rather than a gearbox.
One is connected to the engine (the drive pulley) and another to the wheels (the driven pulley) by a special chain, much like the bicycle in our example above.

However, unlike the fixed metal gears of a bike, each pulley of the CVT is able to vary its radius in order to alter gearing, because the pulley is actually a set of cones than can move together or apart.

THE MOST COMMON ISSUES WITH 8 SPEED MULTITRONIC GEARBOX 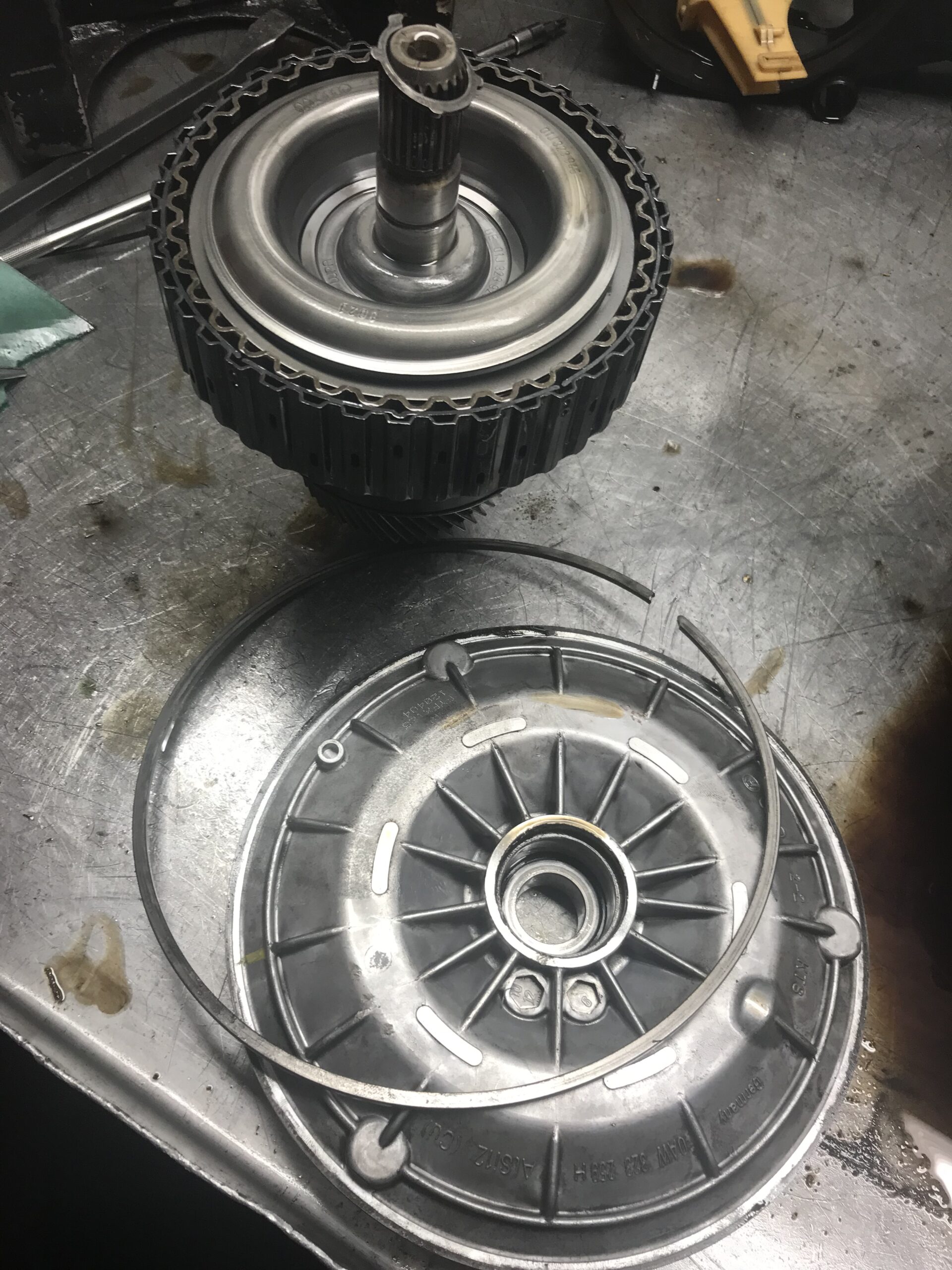 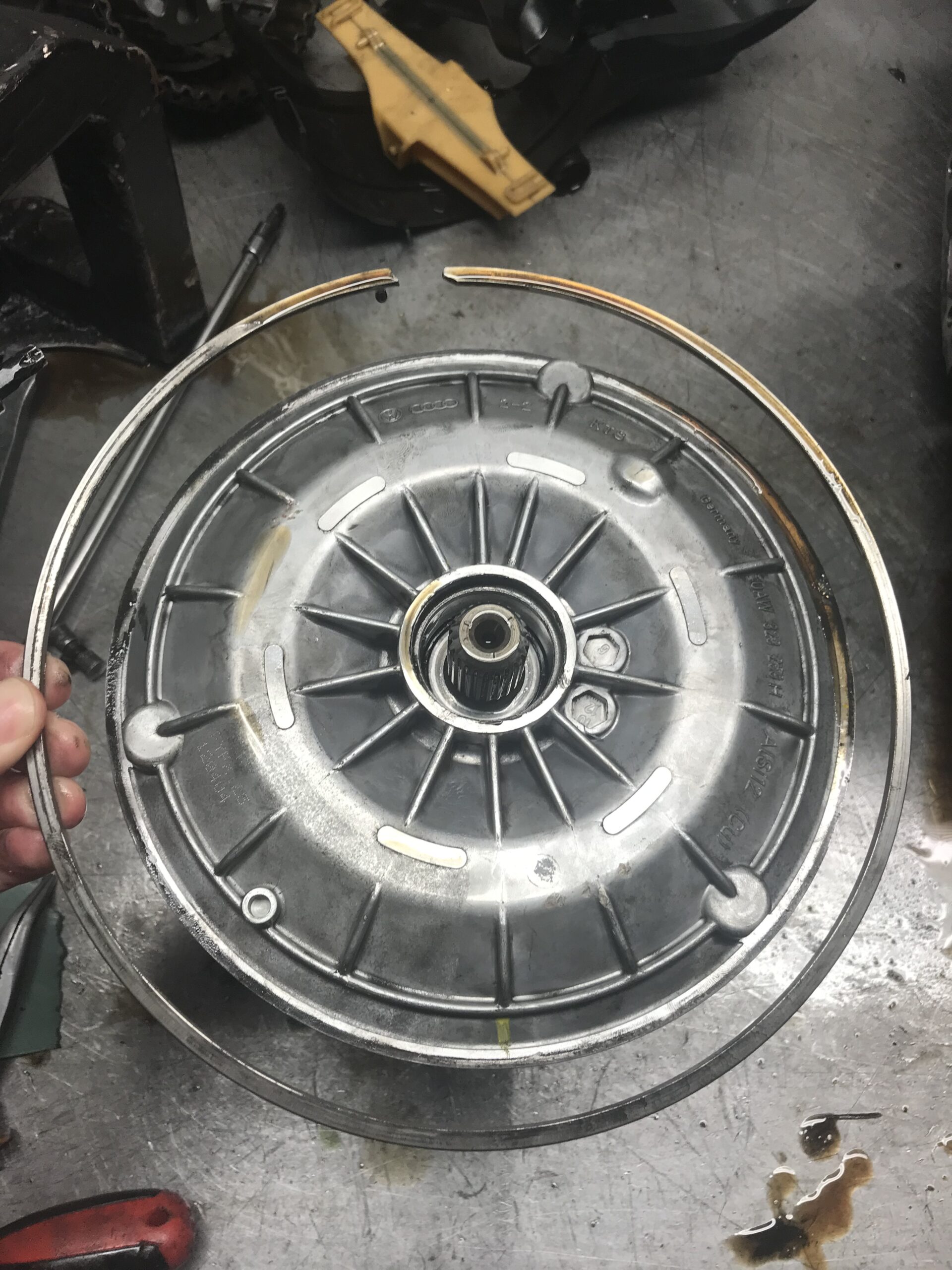 Most common fault with 0AW 8 speed multitronic Gearbox would be broken clutch box (drum). On the older type of that gearbox, whole clutch box was held by bolts. Unfortunately new design doesn’t include bolts, instead we have fitted o-ring that supposed to hold clutch box in place. If o-ring get damaged and get displaced in the best scenario you will lose reverse gear. Worst case scenario if clutch box is displaced will damage inner side of gearbox. 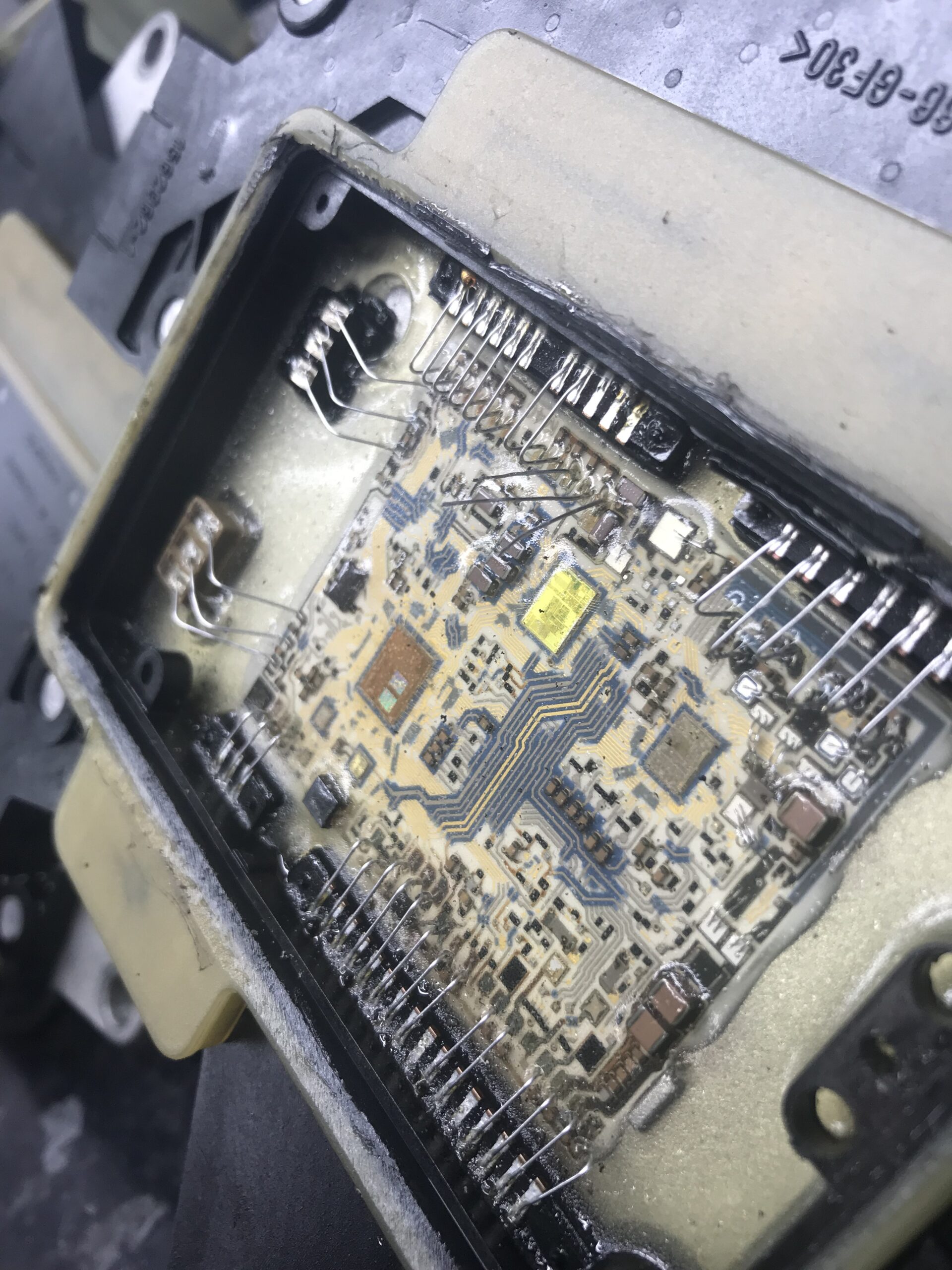 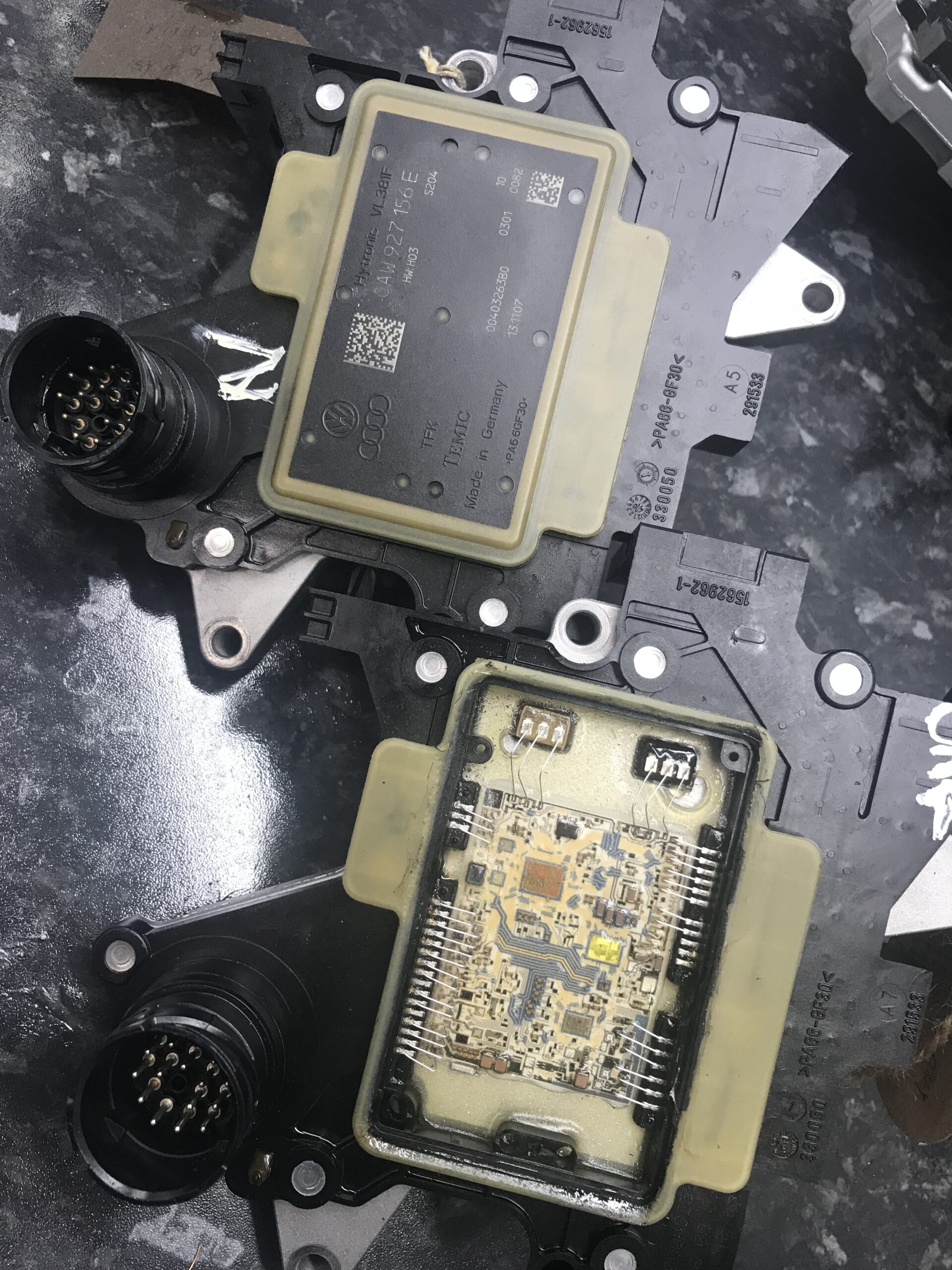 The continuously variable transmission is electronically controlled as there are no gears and as such, the module that controls it can cause a myriad of problems. One of the best indicators that the electronic TCM has gone south is that the PRND indicators will start flashing. This isn’t the easiest part in the world to replace, but it can be done with a little bit of work and mechanical knowledge. 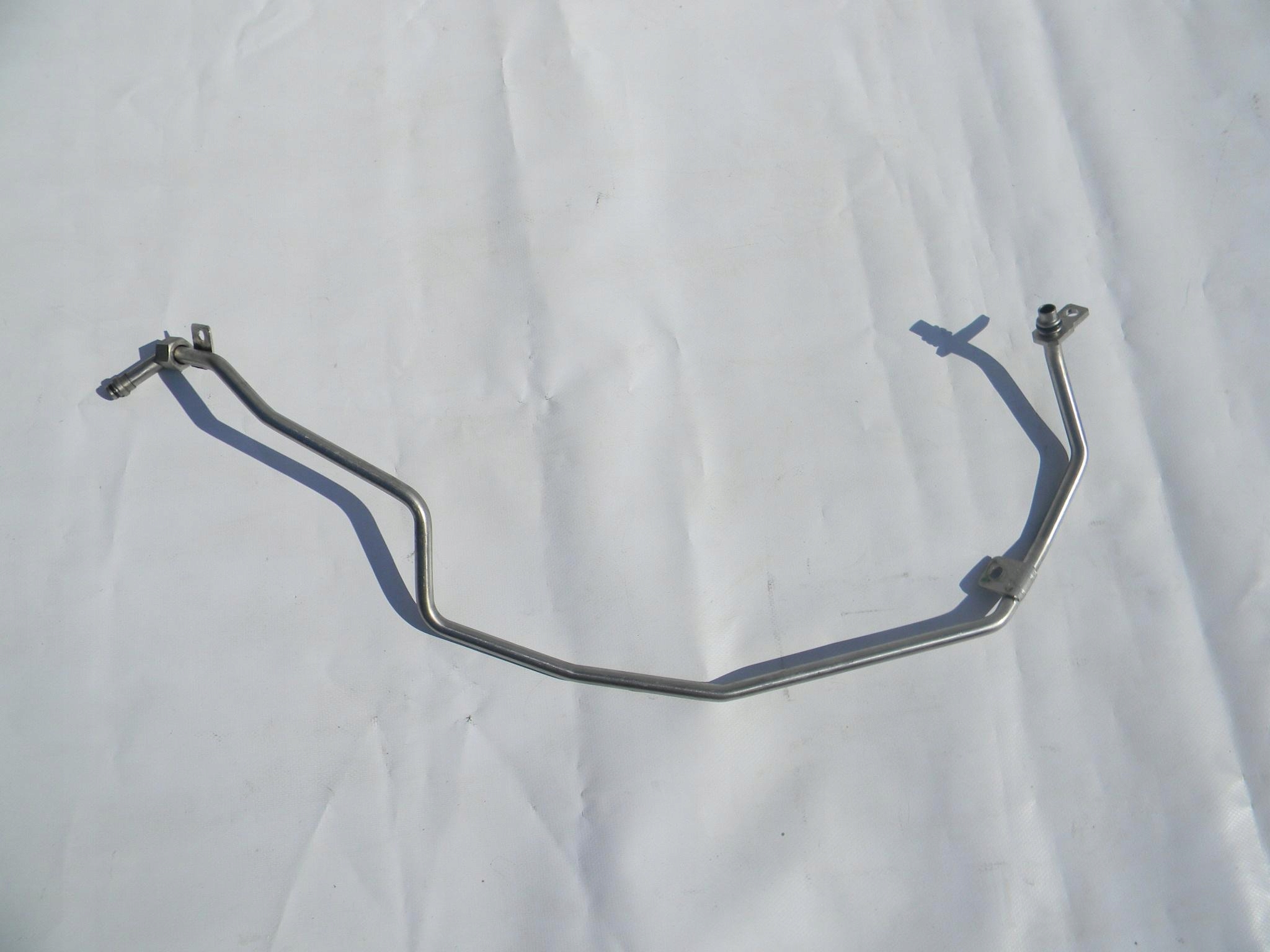 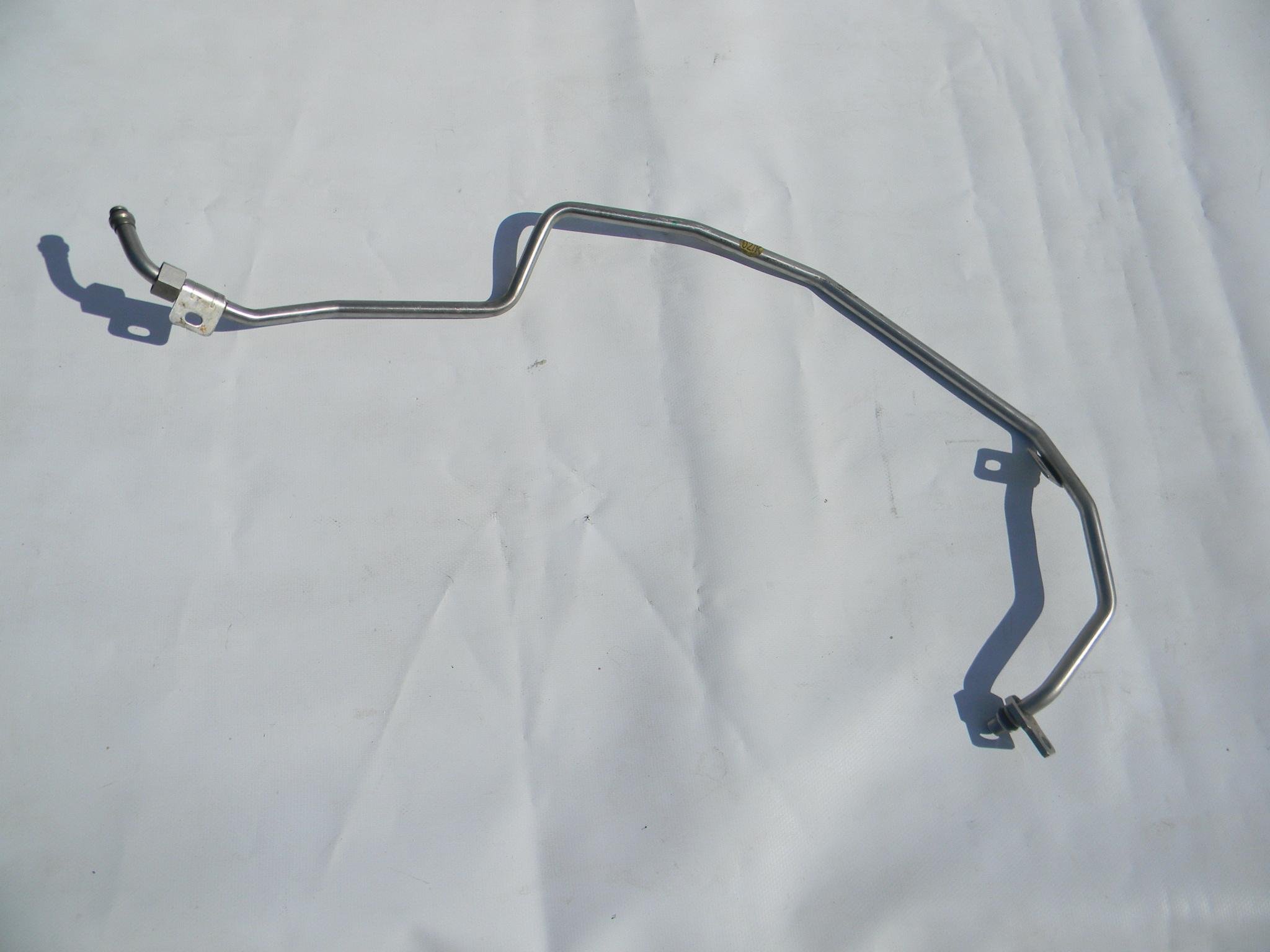 All multitronic gearboxes are continuously cooled via pipes connecting the gearbox and radiator. Because of its location, they might break or become loose. A heavy oil leak will indicate that issue and it’s not recommended to drive the vehicle.

Slow Response or Hesitation Moving From a Dead Stop is "Normal"

The CVT does not offer the same initial torque delivery of a traditional automatic. These transmissions make the car feel a bit under powered when taking off. You may feel a hesitation or a slow throttle response from the stop lights, but that is likely because you aren’t feeling that characteristic shifting from first to second, and on up. Once you get up to speed, you will notice a much smoother ride.

Other typical issues with 8 SPEED MULTITRONIC

Issue 2: Hesitation and/or shuddering during acceleration

HOW TO FIND OUT WHAT IS GOING ON WITH YOUR MULTITRONIC

Jerky car at take off, clutch slip or waving RPM
All of those signs are related to gearbox pressure. Lose of pressure might start a chain reaction of faults and problems. For example if there is not enough pressure build in because pump is not performing properly or output shaft is cracked/broken, CVT gearbox will not be able to work properly. You might experience juddering, slip of the chain or even lose of drive. At that stage friction plates will get damaged and oil contaminated with metal swarf.

You can talk to us by phone, email or our contact form
Our award-winning certified VAG engineers will help you Monday to Friday between 7 am and 4 pm. You can also follow us on Facebook or Instagram to stay up-to-date.  Click here for the latest news.

GET IN TOUCH
© MILTA Technology. All Right Reserved 2016. Made with by FutureSight.

﻿﻿﻿﻿﻿﻿Dear everyone!
Due to unforeseen circumstances we are closed this Friday, the 20th of January 2023.
Will be back to normal operations on following Monday.

Apologies for any inconvenience.

We use cookies for some functionality on our website to work properly, as well as for usability and accessibility purposes: collecting analytics data to understand and improve user experience and advertising.

You consent to our cookies if you continue to use our website. And you can remove, clear, and purge cookies from your device following these steps.