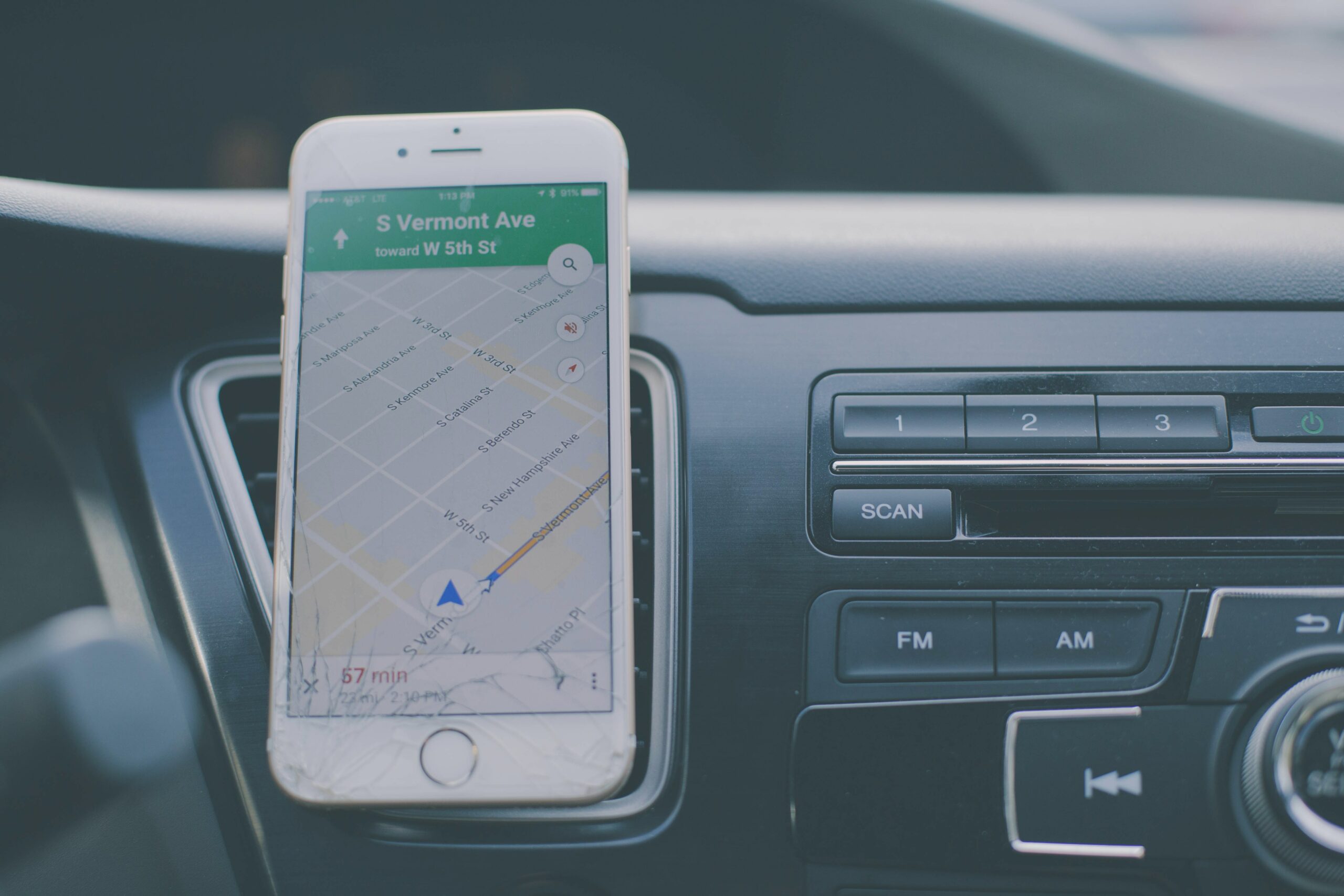 Should I Use Built-in Navigation, or My Smartphone?

The days of the A to Z or other paper maps from groups like the AA are already long behind us – though some are still being printed. The modern debate surrounding navigation is all about two competing platforms, namely our vehicle’s built-in navigation system, typically operated through the central touchscreen, and those of our smartphones with their many navigation apps.

Ever since the first argument had between driver and passenger over directions and route, we have dreamed of an alternative to the traditional map. The first application of the Global Positioning System – GuideStar – back in 1995 was the signal for amazing change that would evolve to the point where we are now. It started with more high-end cars, but then trickled down until eventually some manner of built-in navigation became the norm.
At the same time, however, the smartphone was also evolving. From the humble Blackberry to the mighty iPhone and Samsung Galaxy, we now have a world of information in our pocket. This device is also armed with GPS technology, and thus we can use it for navigation. While distinct at first, the two technology platforms are now moving ever closer together, but advantages and disadvantages remain for each.

To be clear, we are referring here to a system of satellite-guided navigation that comes pre-installed in a car, displayed via the infotainment screen and/or the driver cockpit instrument cluster screen (depending on model/year). What are the specific benefits of this system?

With the system neatly integrated into the car’s dashboard, there’s no additional wires needed to allay fears of batteries running down. The same can’t always be said of smartphone navigation. Having fewer wires also makes for a neater and more relaxed atmosphere in the cabin. We might not realise it, but clutter can really add to feelings of stress or discomfort when they are being piled on from other sources, like noisy passengers in the back, or an impending deadline for which you’re running late.

In most cases, to get a smartphone-displayed map close to your eyeline, you have to buy a separate holder or dock to stick on to the dash, in which you can then place the smartphone. This looks messy, but also clutters your eyeline further with the holder, phone, cables, etc. A built-in system keeps the dash clear, with the worst-cases having to glance at the infotainment screen, but more modern options including the map being displayed in your instrument cluster with the speedometer, or even on a fantastic HUD display which looks as though it’s right on your windscreen.
The most advanced built-in systems now even include augmented reality navigation, where prompts appear in your eyeline as animated objects, showing you even more clearly and safely where you need to go next.

Unless you’ve opted for the smartphone with the massive internal storage capacity and infinite data plan, it can be a problem when frequently using it to navigate. The maps feature on your phone takes up an inordinate amount of space, and uses a lot of data. Google Maps, for example, uses around 0.67MB of data every 10 miles, and 0.73MB of mobile data for every 20 minutes of use.
If you can’t maintain a stable connection, or if the phone’s memory starts to conk out, then it will impact your ability to navigate. That’d be very awkward mid-journey.

Not to be outdone, smartphone navigation comes with its own raft of advantages, too. Below we’ll explore these benefits in more detail:

A built-in sat-nav system on your car might come as a standard feature, but to get the most out of it, you have to usually pay extra for additional features. If you have an older car, then you’ll have to buy a dedicated unit just for that function, possibly costing £100 or even more.
A smartphone, on the other hand, also costs money, but the difference is you get a phone, too! If you spend £100 on a smartphone, you can use social media, take photos and videos, play games and yes, satellite navigate. This makes the smartphone a far better-value option than the dedicated built-in unit.

When you use your smartphone for navigation, you can choose whichever map app you want to use. Apple Maps using too much data? No problem, switch to Waze! With your built-in system, you get what you’re given and have to live with it. Even better, map and navigation apps are invariably free to download.

We spoke above of how the built-in units are better integrated into your car’s system, and that has been true for many cars up to a point. Right now, however, the story is rapidly changing. Smartphone integration software like Apple CarPlay and Android Auto connect your phone seamlessly, bringing the features to your infotainment screen and digital instrument cluster. This connection can now increasingly be made wirelessly. Some models will even allow a passenger to use their smartphone to locate something, and then send it to the driver’s display remotely.

/
When the Gap is Narrowed, Do We Need to Choose?

This is the important question. The prevailing trend appears to be rather than replacing the on-board navigation system, simply integrate the smartphone into the vehicle more seamlessly. It does appear though that it’s the smartphone that is driving this chance, perhaps proving that the flexibility, speed and signal advantages of a smartphone are helping it win out in the battle with built-in navigation.
The additional advantage of using mobile signal towers to better triangulate position is perhaps a defining difference between the two, and the final edge that decides this question in favour of the smartphone. When the wireless connection between phone and car is perfected, however, will we really feel like we’re using the smartphone itself?