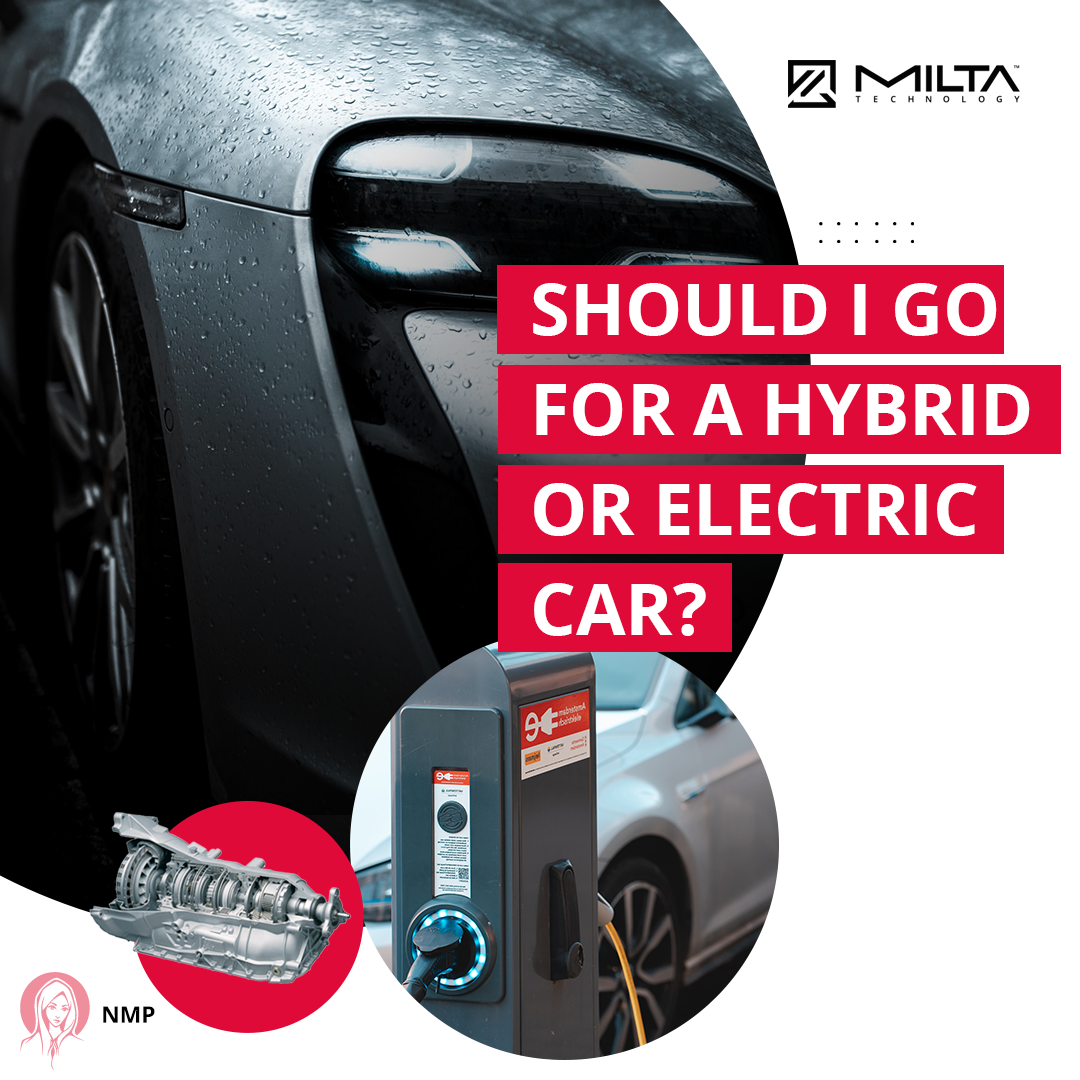 Should I Go for a Hybrid or Electric Car?

The automotive world is electrifying fast, and there is no escaping this fact. This is especially true here in the UK where we are edging closer and closer to the government’s target of banning the sale of new petrol and diesel cars starting in 2030, and hybrid cars from 2035. Even now in 2021, while some have already made the switch an EV, the vast majority of people are still wondering what to do next.

Even for those who do decide to make the switch to electric, a further question remains: should I go for a hybrid or fully electric car? This is the core question behind today’s blog. What is the difference between a hybrid and a fully electric car? What are the pros and cons of each? Knowing all of this hopefully will help people make a more informed decision.

/
Hybrid Cars – What You Need to Know

What is a Hybrid Car?

As the name suggests, a hybrid car is one that uses a combination of petrol and electric power depending on how fast the car is being driven or what “mode” it’s in. Hybrid cars have internal combustion engines like regular petrol cars, but they are also supported by an electric powertrain including a lithium-ion battery and an electric motor. Some describe hybrid cars as the “best of both worlds” option.

How do Hybrid Cars Work?

When driving at low speeds, hybrid cars rely more on their electric powertrains. When driving at slow speeds under 30-mph, the battery and electric motor are in charge, which leaves the internal combustion engine dormant. When the car picks up speed, the system seamlessly switches between the electric and petrol powertrains, allowing the car to gain more power and speed.

What are the 2 Main Types of Hybrid Cars?

What are the Pros and Cons of Hybrid Cars?

Hybrid cars do offer the best of both worlds, and so the plus side is that you get much more efficient driving with petrol consumption rocketing up to 65-70 miles per gallon, which obviously is impressive for a saloon or SUV. On top of that, HEVs are especially good for those who want a lower-emission vehicle but have no facility to plug in and recharge. The petrol engine will take care of recharging, so that’s more convenient.

On the negative side, hybrid cars are infamous for their lack of performance ability. In terms of acceleration, handling and even braking there have been a lot of question marks across many brands. They are good cars for people who drive both in the city and long distances, but their lack of power can be disappointing and make them less fun to drive.

/
Electric Cars – What You Need to Know

What is an Electric Car?

An electric car, also known more accurately as a Battery Electric Vehicle or BEV — because in fact, hybrid cars are a type of electric car, too — is a car that exclusively uses an electric powertrain in place of any petrol or diesel components. There’s no engine under the bonnet, nor mounted in the middle. There is no engine oil, no pistons or cylinder, no crankshaft, no petrol, and indeed no emissions.

Electric cars were previously viewed as rather whacky and avant-garde but now have firmly entered the mainstream, with nearly all major brands now offering at least one BEV in their range. VW is already preparing to launch its third model, the ID.5 SUV.

How do Electric Cars Work?

Unlike hybrid cars, electric cars work on one powertrain, this one being electric. The large lithium-ion battery pack is typically mounted on the base of the car and is connected to anywhere from 1 to 3 (possibly more) electric motors which push torque almost instantly to the wheels. The transmission of a BEV is typically a single-gear automatic where no shifting is necessary.

As the car runs, the lithium-ion battery pack steadily depletes, and the car has to be recharged via a plug-in interface either to the mains AC electricity at home (slow charging) or to a separate wallbox AC charge (level 2 – mid-level). When out on the road, drivers also have the option to use public charging stations, which include both level 2 and faster level 3 DC charging which can add 100 miles of range back into the car in a matter of minutes.

What are the Pros and Cons of Electric Cars?

The first pro is that electric cars are, despite popular opinion, much cheaper and easier to run than petrol or diesel cars. Charging your car with electricity overnight always works out cheaper than filling up at the petrol station. What’s more, you actually have a choice, charge at home or charge in public — no one has their own petrol pump at home! Another advantage is that they are much lower maintenance because they have so few moving parts. Even better, new technology allows cars to receive both digital and physical upgrades via over-the-air software updates sent from the OEM.

The chief negative of BEVs currently is their high price tag. They’re cheaper to own, yes, but are so expensive to buy. The price point will hopefully come down eventually, but for many right now they remain out of reach. The other issue people have is range anxiety, IE being caught in the middle of nowhere with no power. Solutions to this problem are already emerging in the form of mobile charging vans, and more.

/
The Verdict – Which One Should I Get?

If you don’t have the budget for a BEV just yet, hybrid models are much cheaper, especially HEVs. Hybrids are a good “gateway” into the world of electric vehicles, and a nice stop-gap before you inevitably get a BEV in the future. On the other hand, if it’s performance you want, you’re better off with a higher-end BEV with its instant torque, lightning-fast acceleration and much more fun driving dynamics.

In the end, it comes down to both personal need and personal taste. Choose well!