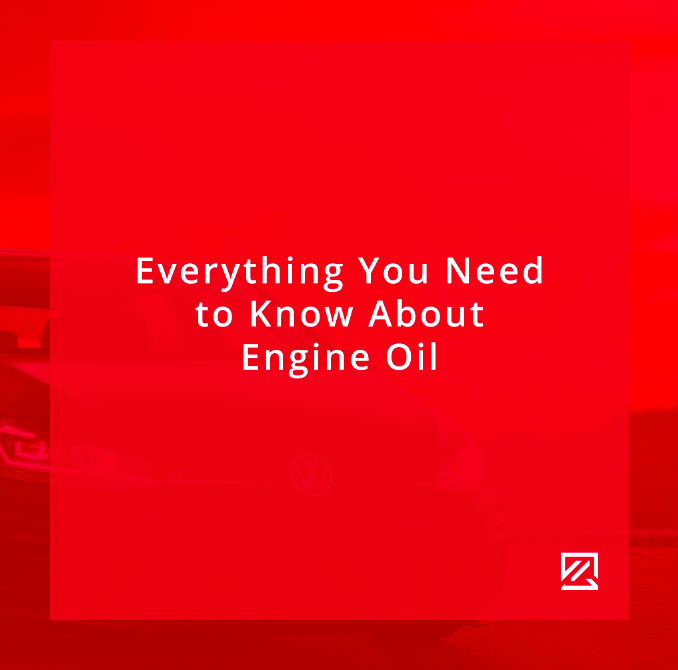 Everything You Need to Know About Engine Oil

You will sometimes hear people say that engine oil is the lifeblood of any car. It may sound like something of an exaggeration, but it in fact is 100 percent true. Without proper engine oil in the right condition, the fact is that your car’s engine simply would not function as it should. In today’s blog, we’re offering up a comprehensive guide to engine oil.

/
Background: What is Engine Oil?

Your car’s engine oil is a liquid substance made from a “base oil” with certain additives that is designed to lubricate and protect your engine’s moving parts from undue wear and tear. In other words, it is the stuff that helps to keep your engine going. A car engine that was left running without any engine oil would very quickly and promptly destroy itself as its various moving parts grind each other down and break each other apart.

When fresh, engine oil is a dark brown colour and typically of a glossy appearance and smooth texture. As it works its magic on the engine, cooling and lubricating as it goes, it picks up various impurities and other bits of debris generated inside the engine. Most of these are initially dealt with by oil filters, but over time the filters reach their capacity and have to be changed along with the oil. That point typically occurs about every 3,000-5,000 miles for conventional engine oil, but modern synthetic oil lasts for much longer, some up to 15,000 miles.

To check on the current condition of the oil, cars are equipped with an engine oil dipstick located in the engine bay. Most learner drivers are taught about the dipstick and how to read it by their instructors since it’s a part of common driving theory knowledge. When you pull out the dipstick, you can inspect both the level and condition of engine oil to see if it’s in need of changing, or getting close to that condition.

There are level indicators marked on the dipstick, so checking the level of oil in your engine is as simple as matching where the oil marks the stick and whether it’s between those markers. As for the condition, used oil starts to turn darker, and will become more viscous, grittier and lose its former sheen. Look for these signs of bad consistency and colour for the best indications that it’s almost time to change your engine oil.

We mentioned above that engine oils contain a “base oil” and additives. The two main base oil groups are petroleum and synthetic. The former are refined from crude oil and their main weakness is the amount of impurities that exist, which is part of the reason they don’t last as long as the latter. Synthetic oil, on the other hand, is engineered not only to not contain such impurities, but even contain beneficial molecules that enhance protection from things like corrosion.

/
What is the Function of Engine Oil? Why is it Important?

The main functions of engine oil include:

Why is Engine Oil Important

From the above list of its many functions, it’s not hard to see why engine oil is so important. First and foremost, without it the engine would simply disintegrate and destroy itself from all the heat and friction that would naturally occur during its operation. Next, the oil is an essential sealant, energy transfer agent and shock absorber that helps the engine operate under harsh conditions without further damaging itself.

Synthetic oils that are found in most newer cars have the added importance of protecting the engine from corrosion. Regular engine oil doesn’t have this property. It has to be added artificially by those engineering the oil. This can make them more expensive to purchase, but the oils tend to last much longer, so the cost is mitigated in this way.

/
Why is Engine Oil Viscosity Different?

The viscosity of engine oil refers to how thick the oil is and therefore how freely and easily it flows through the engine. It’s an incredibly important factor in choosing the right kinds of engine oil depending on your car’s make, model and year, as well as the local climate and other factors. A balance needs to be struck: the engine oil needs to be thin enough to flow quickly and get where it needs to be, but also thick enough to protect the engine.

The Society of Automotive Engineers (SAE) developed a handy system of classification to denote engine oil viscosity. These classifications are increasingly flexible, however, since many of the newest engine oils are “multi-viscosity” which means they change according to the temperature to deliver the best of both worlds.

A modern multi-viscosity SAE classification number looks like this:

The “W” refers to winter. In previous ratings, the oil might be listed as SAE 5W or SAE 40W. The former indicates low-viscosity oil that is better for cold starts, the latter a high-viscosity oil suitable for operating in higher temperatures. The multi-grade classification like 0W-30 and 20W-30 tell you how it operates when cold and warm. The general rule remains that the lower the left number, the better for cold starts, and the higher the right number, the better for using at high temperatures.

/
Never Forget to Check the Oil

Now you know what your oil is, how it works and why it’s important. The main take-away from this blog should be a strong reminder to never neglect your engine’s oil, no matter how new your car. Keep your eyes open for signs of problems like oil leaks, warnings on your dashboard about overheating oil and engines, and the condition of your oil on the dipstick. If the oil goes wrong, then sooner or later the entire engine will, too.